1. Browser version is not the latest one -> actually it is only as DEMO!
2. Developement is on-hold due lack of interest in this project. Actually there are 12 levels ready out of planned 40.  Still granting a 30-90min playtime for less than a price of a beer! ;)

Move, jump, shoot, collect materials, craft, develop your weapon or unlock new ones, clean the city from the aliens

It is a plaformer shooter game with retro style pixel graph (some kind of 2D-Fortnite in back of 80's :) )

Aim of the Game
Shoot the aliens to save the world. Collect raw materials to craft and develop objects, collect the coins to buy some stuff to your shelter.

Story
This is 1986, strange catastrophes happened on the Globe.

January 28, 1986 - Space Shuttle Challenger disaster
April 26,  1986 - Chernobyl disaster
May 05, 1986 - The next danger had arrived... A City had been attacked by alien creatures and You are the one who should save the humans... save the city, save the world. ...and you might be able to understand the reason, ...and to identify a connection among these 3 black days...

Be prepared, and good luck!

Phase2  - plan (up to the poularity and/or support):

For the latest update and for the best performance you can grab the windows version of the game.
Addtional hint: Full screen: CTRL + F

This platform-shooter game was inspired by ShaunJS platformer tutorial, still using some part of the code of the simple mechanics, but already improved some area and of course, there are plenty of plans to add new features as well.

The very nice "time-adjusted" pixel graph was done by Leon.
Tiled Map Editor and its converter to GM:S 2.2, the GMTiled was also very usefull. Donates have been sent. ;)

Targetted platforms:
- Android (Google Play),
- Windows (downloadable version for the best performance)
- Browser version (html5) to play free without any installation (not optimized to play browser for mobiles, but you can at least give it a try :) )

In order to download this game you must purchase it at or above the minimum price of $1 USD. You will get access to the following files:

i get stuck here third level

What version? Windows or a browser?

but i learnt i could shoot boxes so issue was resolved

I played your game again now the controls work

Many thanks again to give a 2nd chance for review. I started to make a notes about your remarks, but there were so much valuable items so I will watch the vid again with bigger size of paper... :D

Regarding aiming with mouse... well... I like it, but it seems I am the only one who prefer this way, the others - like you - expect other way, as you explained. It seems I need to rework that.
One comment: the very latest version (uploaded today) have an improved platform mechanics, You can already jump through them from bottom direction.
I really appreciate your direct suggestions, they will be surely considered.

I played your game on my channel

Thanks for playing my game and put some effort to get it worked... Of course you should be able to shoot on this demo level, so I have immediately checked the code and it seems it is my failure, the mac was not included in case of shooting and initial windows resize. I am sorry for that. The next update will include the fixation of the bug.
Also thanks for the other observation, we alreday revised the starting of the game, but based on your feedback I will still consisder further revision especially for initial phase.

Thank you. We are working on the next level now. ;)

I played the android version and what I can say is there's a lot of potential for this game! I love the pixelated designs and I hope you'll add a backstory and some various enemies in the future. Will be looking forward on what this game would be in the future and will definitely play again :)

Also, made a gameplay about it;

Thank you very much for playing our early-released 1 level game on android. I was laughing on the funny title you set! :D

Rergarding the story, the aliens, the number of levels and some crafting potential: definetely, we are going to expand and improve. But I also made some notes based on your gameplay comments. :)

Concerning android control it is still a question, at least we put already 2 options to choose, but it seems it is still not perfect.

Anyway, I will keep you informed about upcoming updates (actually performing an internal tests for the next level). Thanks again.

Hey, the update is out now. EDIT: also for Android

Hey. I played your game and made a video about it. I enjoyed it. It felt like an old school video game. As I understand, future versions will have crafting and similar mechanics because I could collect some resources. If you want me to cut your game out of the video, let me know. However, if you like the video, I make videos for such developers like you every day. I will be happy if you subscribe. Anyway, I had a lot of fun playing your game, and the video is below.

Thank you very much for playing the game. For sure it is a very early release, demo of one level, however lot of improvements and features are planned what we are working on, like crafting mechanics, other aliens, more levels, etc. Would be happy if you check it out later as well to see the changes! ;)

Loved the game and definitely going to follow =D it has work to be done, but I can tell it will go into it =) do tell me when more is done, would love to do a follow-up!

Thank you so much for funny but also valuable gametesting. Definetely most of the points are under development but we take some observed items into consideration to improve the gaming experience too. New level(s), simple crafting options and improved game engine is planned for the next release in a few weeks from now.

Update is just out now. We are far away from finish line, but made some progression for sure. 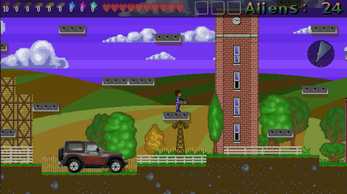 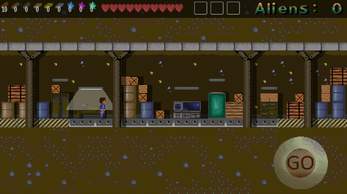 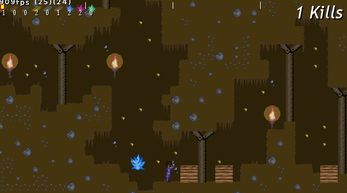 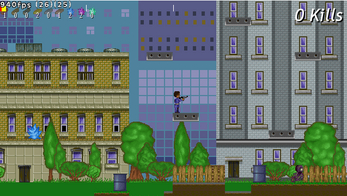 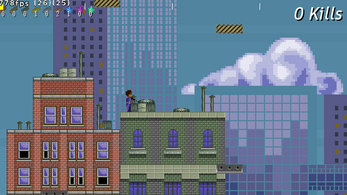